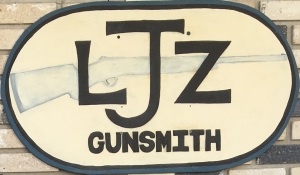 Larry J. Wermuth, age 73, passed away on April 22, 2020 at Creekside Terrace in Belton, Texas. A memorial service will be held at a later date.

Larry was born on September 17, 1946 in Madison, Wisconsin, the son of Frank and Ila (Polglase) Wermuth. He attended St. Bernard’s Catholic grade school and graduated from Middleton High School in Wisconsin in 1964. He then attended Trinidad State Junior College, Trinidad, Colorado earning a degree in gunsmithing. Larry joined the Air Force and was stationed at Lackland Air Force base in San Antonio, Texas. He was assigned to the munitions and weaponry division. After four years at Lackland, Larry got out of the service and moved north to Belton, Texas.  He started his gunsmithing career by joining two of his friends at their gun shop in downtown Belton. The name of the gun shop came from the initials of him and his partners. During his many years in Texas, Larry would take a trip back to Wisconsin, almost yearly for a time, to hunt pheasants with his dad and the American Water Spaniels Dad raised, Uncle Arnie, and youngest sister, Carla. Larry later bought out his friends shares of the gun shop and became the sole owner of his beloved LJZ Gunsmith. Larry knew the mechanics of guns and firepower. No matter the problem with a new, used or old gun Larry could fix it. He was very precise with his paperwork and his business. Many gun friends would come to the shop and visit and talk. He lived for his shop and the company of his friends. He often walked to the gun shop and had breakfast at his favorite restaurant - Jalisco’s for eggs and coffee every day except Sunday. He had a lot of friends there who cared about him.

Even when he got really sick with COPD, Larry would not stop running the gun shop that he loved for over 40 years. It’s what gave him purpose every day. He was exact and took pride in the work he did. Larry was a newspaper reader. He read the Temple Daily Telegram from cover to cover. He would clip out stories and share them with his family in Wisconsin. Larry would keep up with all the local sports teams when a friend had a child playing. He would tell who won, the plays and the score. Larry was kind and caring, funny and friendly. He never let his family and friends down. When you asked Larry for a favor, he always came through. He was dependable and we will miss him terribly.

Larry is survived by his many friends in Belton who provided conversation, kindness and support. A special thank you to Roxane and Ken. He is also survived by his sisters, Janet (Doug) Allison, Mary (Mike) Jastrzebski, Carla (Tom) Wolf, brother-in-law Dennis Early, nieces and nephews: Marci (Colin) Hughes, Tom (Abby) Pertzborn, Josh Wolf, and Hannah Wolf, great nephews: Liam, Owen, Braeden and great niece Lydia. Larry was preceded in death by his parents, sisters Marilyn and Cathy, and brother-in-law Mark.

In lieu of flowers, Larry's family asks that Donations be made to: Jaliscos Mexican Restaurant in Belton, Texas.

To send flowers to the family or plant a tree in memory of Larry J. Wermuth, please visit our floral store.