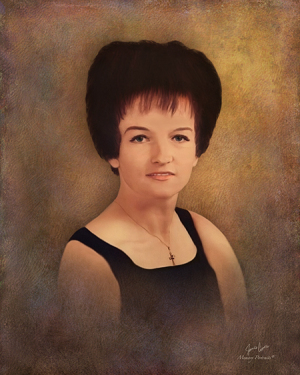 Marianne H. Luby, age 80, was released from the bonds of this life and placed in the arms of God on Saturday, August 8, 2020.  Her nearly 40 year reign of pain from rheumatoid arthritis is over, and her family rejoices in this knowledge.  She will be greatly missed by family and friends.

Mom was born on Sept. 16, 1939 in Wigstadtl, Czechoslovakia to her parents Otto J. Mitschke and Hedwig (Zahel) Mitschke.   She was born two months premature and was not expected to survive, but proved the village doctor wrong.  Near the end of WWII her family relocated to a small village in Bavaria, and that is where she was raised with her brother and sister.

After school she moved to Augsberg, Germany where she had several adventures and then met and married SGT Bobby Evans.  She spent most of the next 21 years being an Army wife, moving many times including, but not limited to: Ft. Bragg, Ft. Benning,  Ft.Greeley, Alaska, and Crailsheim & Oberammergau, Germany.  They had two children, Elizabeth and Rodger.

After the parting of their marriage, Marianne spent several years working in Belton trying to find her niche.  She was asst. manager of Shugart’s Dept store for a while.  Upon much reflection Mom made the decision to complete her first life’s desire and become a nun.  She began the process of becoming an oblate with the Benedikteu Order St., Scholastic of Boerne, Texas.  However, before she was able to finalize this she met John Luby, and the rest was history.

Mom and John married in April 1982 and spent the next 20 years traveling and being devoted servants to their church, Christ the King Catholic Church in Belton, Texas.  During all those years one of the things that Mom did was make rosaries.  She was famous for making those rosaries and it’s been predicted she made well over 50,000 of them (maybe closer to 100,000).  They were shipped to churches, orphanages and even prisons all over the world.  She spent many years teaching the children of her church how to make the rosaries.

Mom was devoted to her pets and loved all animals.  She was her neighborhood’s pet care person, and would frequently have a “guest” or two in her care.  When asked what her favorite color was the only answer that would come to mind is “leopard print”....she loved animals.

Before the arthritis took her mobility away she did what we thought was a crazy thing, and went sky-diving for her 65th birthday (with her doctor’s blessing).  She had always wanted to jump out of a plane, and she did it!  She would tell anyone who would listen that life is short and you should go after your dreams because you just don’t know what tomorrow will bring.

Mom was able to continue to live in her own home right up to the end of her journey largely due to the love and help of her neighbors and church family (you know who you are!)  Without their help it would have been much harder for her to stay in her home.  Her grandson, Tony, lived with her so she wasn’t alone, but without the additional support of her church family and neighbors, it would have been much harder.

Mom was blessed with two grandchildren, Sara and Tony.  And she was additionally blessed with four great-grandchildren that she adored, Abram, Axton, Ash and Colette.  She was “unofficially” grandmother to countless children from her church, and took much joy in having them visit her, when she would always treat them with popsicles.

Mom was preceded in death by both her parents, and her brother Otto Mitschke, and by her husband, John.

She is survived by her sister, Anni (Heinz) Dudek of Schrobenhausen, Germany, her daughter, Elizabeth (Randy) Smith of Temple, TX,., her son, Rodger Evans of International Falls, MN., her grandchildren: Sara (Colin) Guy of Houston, Tony Rovetto of Belton, her great-grandchildren: Abram Rovetto of Temple, Axton and Colette Rovetto of Harker Heights, and Ash Guy of Houston.  Additionally, she is survived by her niece, Astrid (Herbert) Wimmer of Kalskron, Germany and their children: Verena, Christof, and Rebecca, and her nephew, Otto (Suzanne) Mitschke and their daughter, Laura.  She is also survived by her beloved dog, Ladybug and cat, Lucy.

Memorials may be made to: Christ the King Catholic Church in Belton, or Helping Hands Ministry of Belton.  You can also honor her life by adopting a pet, planting a tree, baking cookies for a neighbor and most of all: tell your loved ones that you love them each day.

The family wishes to express a special thank you to the host of angels who helped keep an eye on mom over the years – you know who you are! To Dr. Kimmey and Dr. Clark for their care over the years. To Park Place Manor for their care of her during her rehab the last 3 weeks of her life. And, to Dr. Martinez for her care the last few days of mom’s life.

To send flowers to the family or plant a tree in memory of Marianne Hedwig Luby, please visit our floral store.